So, what’s with the tagline – Bible stories for atheists, creationists, rationalists and rogues. That seems like a pretty disparate and mutually exclusive group?

What we’re trying to do here is present the story of the old testament in a more layered and complex way than many are used to. The characters all need to feel that they are real and authentic people, with motivations we can understand and relate to.

That, for me, is really the cornerstone of good story telling – make the people real. So, to do that we’ve gone back to the sometimes ancient sources and kabbalistic commentaries. We’ve delved into them and used them to gain a better insight into what the hell (pardon the pun) these people were thinking.

We make no judgements as to the veracity of the Bible as a divine document. We’re looking at it as literature. At the very least it’s a very important piece of writing for most of the world, full of the archetypes that resonate through our collective stories over the centuries.

That, and it’s a rattling good epic tale of family, empire building, betrayal and redemption.

So, we hope you find it entertaining, but more over, we hope it gives you something to think about as well.

Please let us know your thoughts – email us at hello@biblicalcomix.com, and if we do get some healthy debate going we’ll be opening a user forum at some point to move the discussions on to there.

And tell your friends – sales are our life blood!

Where Biblical Came From

Hell, I like everything big – but mostly I like my stories to be big. I like my characters to be flawed and real, and if you put the two together you have big, epic stories, that you intimately care about.

Let’s rewind the tape for a second. Just over a year ago I was a freelance graphic and web designer, who had just finished ANOTHER pointless website, for ANOTHER pointless business that no one would ever care about or put a cent into.

I was standing on the ledge of my building, wondering what sort of mess a 350 lb male caucasian in his early forties would make on the side walk below.

OK, I wasn’t – but I did think about it when I had a client ask, for the billionth time, to make something ‘pop’ more and use more ‘synergy’, and a realized I just couldn’t do this any more.

I quit. I quit because I believed life is precious. Life was a gift. Life was something that should be used. I quit because if there was a higher power in the universe, then it wanted something more from us than just marking time. And if there wasn’t or it just didn’t care what we did, then living a life of meaning is just so much better than not.

Either way, I quit – and did what anyone would do when violently changing career paths as part of a mid life crisis.

I decided to make a career in the funny books.

Now, I’ve always loved comics. John Wagner and Pat Mills basically raised me. Judge Dredd shooting himself in the midst of the apocalypse war during the early 80s is still seared into my retinas. I loved it all. I loved Robo Hunter and Nemesis and Rouge Trooper (who I always thought was called Roger trooper), and then later V for Vendetta, Swamp Thing, The Invisibles, Powers and on and on.

Inverse to my love of comics is my hatred of Biblical translations in pop culture. They’re always preachy or just wrong. They always are looking to make a point, or make no point what so ever. They’re just very rarely any bloody good.

Which is a bit of a pity, as the old testament just has some rattling good source material in it.

There is a strong perception that Bible stories are fairy stories, with little depth, internal logic or reasoning. Take the story of the Tower of Babel for example – it just doesn’t hold up to any analysis.

Mankind wants to wage war with the creator of the universe, who, by definition is a meta physical being. So they decide to be build a whacking great tower, and climb up to heaven to attack it physically.

I don’t want to malign anyone of faith, but for me – I just didn’t but it. I didn’t buy that humanity could have been so stupid as to attempt such an attack. It just wouldn’t work on so many levels.

But I also didn’t buy that this document, which is so fundamentally important to the underpinning of society’s cultural heritage, would be so 2 dimensional and full of plot holes.

So, rather than rejecting the story out of hand, I looked a bit deeper. I looked into ancient Jewish and Muslim writings, and found things that would make the stories work. Make them tick and make sense.

And that’s what I’m presenting to you now.

Not you momma’s Bible stories. Bible stories that are still Biblically accurate, and respect the source material – but where the characters are real, flawed and three dimensional.

We have three issues in print right now, and issue four on the drawing board. We kick off with two part story of King Nimrod, the builder of the Tower of Bable, and his life, times, hopes and fears. And then in issue 3 we have an issue dealing with the story of the Raven on Noah’s ark, and his titanic theological life and death struggle with Noah.

The Raven issue dove tails (no pun intended) into the 3 part Jonah and the whale story cycle that I’m working on now. Little spoiler here – there wasn’t a whale in the story, it was a big fish. It doesn’t show up in the first part, and it probably wasn’t a fish at all, but a allegory for Hell itself.

Ahh, but all that to come.

So, why should you put your hard earned cash down, and give me a punt, to see if it’s a journey you want to join me on?

Firstly – It’s cheap as chips, mate. Just 75 cents an issue for digital!!!!! And they mostly run over well 22 pages of story. 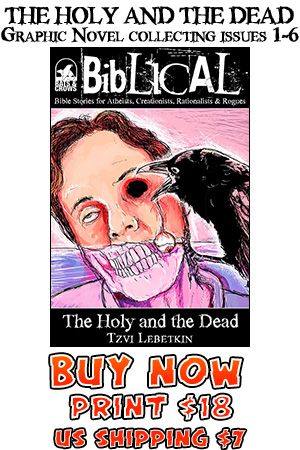